Helping RPers find each other
Filed under: — Psychochild @ 11:53 PM

One of the problems you have with RP is finding other people. There’s all sorts of different RP types and styles, and it can take a while to find people you really click with. The RP community has tried to create ways for RPers to get together, but I think that developers can help this process along as well.

Let’s take a look at a few ways, shall we?

Meridian 59 had a space where you could put in information about your character. Ideally this was supposed to RP information; a description perhaps. And because M59 was so early, there was even a place to put a URL and a button that would open a browser. This sounds pretty typical these days, but keep in mind this was 25 years ago! Hell, the original boxes of M59 brag about having Netscape Navigator software inside. (I’m feeling old because I know a bunch of people who might read this have little idea what that even is without a Google search.)

FFXIV has “Search info” you can edit, but because it’s a Japanese game the search info is relatively tiny. It only allows for 60 characters, which can say a lot more in 60 characters in Japanese than you can in English! On non-RP servers, people put funny sayings or cute ASCII drawings, but for RPers we try to pack in info. As a result, there’s some shorthand that you need to get used to in FFXIV to find other RPers. Even then, people might even leave info out because it didn’t fit. I think one thing that would help FFXIV RP would be to expand the search info to allow for more characters, at least in the North American client.

FFXIV allows you to search for people by a variety of flags and other bits of information: 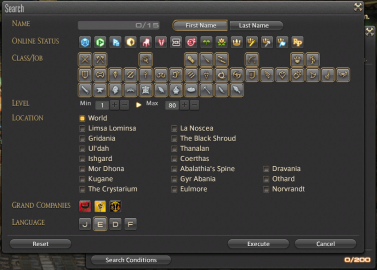 There’s a lot of information that has little reason to search for. Searching for a Warrior (the little axe icon) doesn’t help because it only searches for the current class, not all possible warriors! If I’m looking for a tank, then I’ll miss the people who aren’t currently set to a tank class. Frankly, I’ve barely used any of these options besides the name search to find someone in particular when I know their name.

But imagine if you could search by RP preferences? Set some RP flags on your character and not only have them show up in your limited bio, but also let people search for them. Maybe… you could even search for people within a certain distance from you. Being able to find active RPers looking for RP within 10 yalms (FFXIV’s yards) would be amazing!

This is another big problem. While you can flag yourself for RP, that doesn’t give a whole lot of information. Is that person you’re looking at the person you’re currently RPing with? Are you looking for RP? Do you want to include more people in your current RP? Do you want to not be disturbed because you are RPing There are a lot of options for finding a party, for example, but for RP there’s just the simple tag. Some people take one of the more obscure tags, “looking to meld materia” and use that for additional meaning in RP events; usually someone important like a boss enemy or NPC.

But I think it’d be interesting if RP tags showed up in the map. Running by, you might see an RP tag on the map in a place where people are RPing. See the tags on the overworld and people might go over there. As it is, if you want to find RP you need to hang around a common area. But while you might be looking for lore-abiding adventure RP, you’re standing next to the vampire cosplayer and the half-naked ERP bunny.. hard to stand out from the crowd. More tools to just find RPers in the world would be nice.


RSS feed for comments on this post.
TrackBack URI: http://psychochild.org/wp-trackback.php?p=1555