Ninelives and the single-player MMO experience
Filed under: — Psychochild @ 8:13 AM

Back in the early days of my MMO development career, a question developers asked ourselves was, “Would MMOs still be fun with nobody else around?” The consensus was, “probably not,” as a lot of MMO gameplay was pretty thin and it was really the social interactions that were the focus.

Obviously things are a little different some 18 years later. But, perhaps it’ll be interesting to examine that question in more depth given a more modern context. And a new game Ninelives gives the perfect excuse to look at this question, as it is essentially an MMO without other players.

So, what happens when you take the players out of an MMO?

The Lonely World of Warcraft

A lot has been made of WoW’s streamlining of the MMO experience. Instead of waiting around for a group and dealing with the social overhead that grouping required, WoW streamlined away most of the group aspect in the leveling game; you can take your character from fresh newbie to max level without having to rely on a single other soul. People hailed this as an improvement in MMOs, but some wondered at the purpose of spending a subscription to play by yourself. But, this change lead some academics to look at the “Alone Together” phenomenon, saying that perhaps people really just wanted to play by themselves.

Of course, this caused some problems, notable when people graduated to the “elder game” of running dungeons and raids with other people. Some classes known for being easy to solo to max level with, particularly hunters, were known for being a real mess when it came to working with others. Some chose to ignore the dungeon/raiding elder game altogether and focus on working up alts. The staid predictability of designed content was more appealing to some people than the vagaries of dealing with others. From a development point of view, a focus on solo content damages the social fabric of the game, which helps with player retention.

But, at the end of the day, there were still other people in the game even if a good share of people didn’t choose to meaningfully interact with them on a gameplay level. From some random idiot stealing your ore node to finding someone to put a cool particle glow on your weapon, other people were still part of the game. This is true even in more recent games in the WoW vein such as FFXIV.

Can’t get catty with others in Ninelives

I read about a new game Ninelives over on MassivelyOP. It’s a game developed by a very small team, the core of which is two Japanese developers.

Not reading the fine print too closely, I downloaded it and logged on. I was distraught that I didn’t see anyone else trying this interesting game, until I noticed that the “multi-player” option on the character select screen was greyed out. I later ready that multi-player was to be added in the future. So, this is truly a single-player MMO-type game.

The game still has a lot of MMO idioms. The game doesn’t pause, the world is fairly open and able to be explored, there are quests scattered around the world, and portals leading to dungeons dotting the landscape. There’s even a stone with a 10 minute cooldown in your inventory that allows you to teleport around to bind points you discover. It feels very much like an MMO world you’re running around in.

A closer look at the game

Character creation is pretty simple: pick a race (which seems purely cosmetic), some very limited character appearance customization, and a class (two classes available to explore and a third teasing you by being unselectable) I’ve started playing a goblin mage in the game, and I got through most of the content in the game. 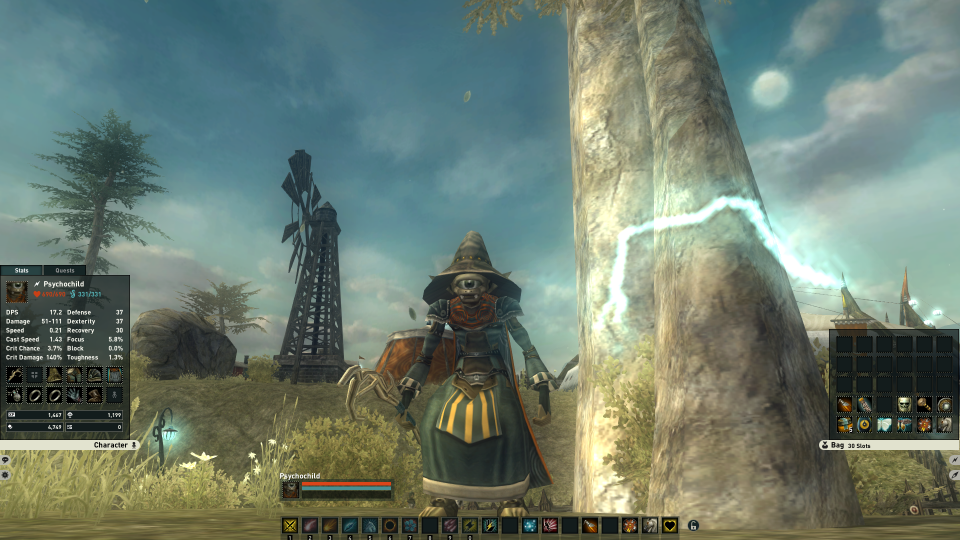 And there’s the handsome charmer himself!

The game is very much an RPG. But, it doesn’t have levels, instead you have a talent tree where you buy abilities and upgrades with experience points earned from killing monsters and completing quests. Skills in a column cost a certain amount of experience, which increases as you go away from the center of the tree. The number at the top seems to indicate that you can only buy a limited number of skills; it’s unclear if this is a hard limit or if it will be increased as the game is developed. But, without levels, it can be hard to really judge enemy strength. A few times I got in over my head by attacking something that looked like a monster I was defeated easily, but SURPRISE! it was really a higher level variant.

The mage is pretty fun, focusing on doing ranged damage. The class tends to do a lot of damaging over time, and has a quick-casting (but mana intensive) magic missile you can use while kiting things. However, it can get a bit dicey in dungeons when you don’t have a maneuvering room and might stumble into more enemies. Important tip: if you body pull (move within range of a monster’s sight) you will generally only pull one, but firing a spell at a target will generally bring a bunch of enemies.

However, the mechanics make it hard to really kite enemies. Most of the snare abilities have very short durations. Some of the best ones have very long casting times, which make them of marginal utility while trying to kite. I found it pretty easy to get through trash by smart pulling and lots of resting, but a few bosses just kicked my ass all over the place. I rolled a “blade” character to try out the other class when I got frustrated by getting obliterated by a dungeon mini-boss after going through the dungeon for over an hour. 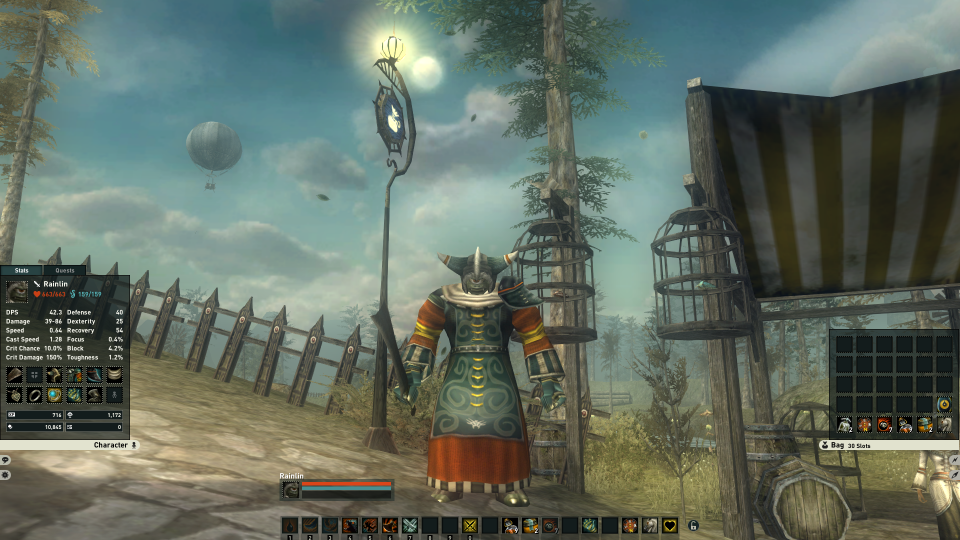 He’s a melee fighter, I swear!

Maybe it’s understanding the game better, but this character is a LOT more powerful. I was able to take on things early in the game that would turn my mage character to paste. It has a good blend of hard-hitting skills and AoE ability. Some of my attacks are still DOTs, but there are a lot of just heavy-hitting abilities. All warrior abilities use a percent of mana, so increasing your mana pool is pointless. However, warriors regenerate mana quickly as they get hit, so the only time you really run low on mana is if you’re not getting hit. I’ve been much less constrained by resources.

This character was also a lot more lucky. I’ve found a lot more named items, which is why he’s wearing a robe; it’s pretty beefy because it’s a named item. It’s more than just knowing the game more, as both characters have about the same number of kills.

There are not a whole lot of different abilities for each class. Both the mage and the blade rotate through 3-4 different abilities in most battles, with a few “oh shit” abilities you use when you get into trouble and a bunch of passives that give you other boosts. But, overall, it feels like solid MMO combat, particularly like more modern MMOs with limited active skill selections.

Trying to define what an MMO is one of the favorite pastimes of lunatics. It usually devolves into a “I know it when I see it” situation, but let me try to describe why Ninelives feels like an MMO despite not having other players.

There are certain mechanics that are borrowed directly from MMO standard mechanics. An ability hotbar, quest givers and rewards, different rarities of equipment including named items, a zone map that fills out as you explore it, binding points you can teleport to, mounts that give you a speed boost around the map, “elite” monsters that are variations of existing monsters, summonable non-combat pets, etc. Of course, a lot of these mechanics have been borrowed from prior games; equipment rarities and named items were a part of Diablo before WoW expanded the system and incorporated them. But, what beyond some likely hand-me-down mechanics make something feel like an MMO?

I wrote a previous blog post asking what separates out an MMO from a single-player game beyond just the other people in the MMO. The answer for a lot of people was still “the other people”, but there are a few interesting comments. In particular, I thought Tony’s comment was interesting: “Single player open world games are not quite complex enough to fully emulate (and populate) the randomness and trends that you can experience with an MMO in ‘single player mode’.” Other people add chaos to the system, even if you’re not directly interacting with them. As people pointed out, it’s easier to have what feels like a “real economy” when there are other people than when a developer creates an economic algorithm that can be reverse-engineered.

But, I think there’s another important element here: the continued development of a game. Ninelives is currently in alpha, with a roadmap for future development. Sure, it’s pretty generic (and includes multiplayer way down at the bottom of the list), but I think this element of things potentially changing is one thing that helps make it feel like an MMO. The game in 6 months will probably be different than it is today. I think this is a little different than expansions and mods, as those tend to be optional and not necessarily up to the quality of the original. An MMO, on the other hand, has patches that you have to play with. And, unless the developers really mess up, it’s likely that the patches and additions will be more of the same of what you liked in the game before.

I think it’s that feeling that the game will be expanded that makes it really feel like an MMO.

I recently reached maximum levels in the combat classes on my FFXIV character. Without the carrot of leveling up my characters, I’ve slacked off playing the game somewhat. I find myself logging on Ninelives and playing there. I’m not going to quit FFXIV soon (especially not with a new patch dropping soon!), but taking a break to play another game is a good change of pace.

Of course, I did run into an old MMO issue a few days ago: I lost connection with the server, which interrupted my game session. I was able to log back in a few minutes later, but perhaps this is another way the game feels like an MMO. :)

What do you think? Do you think a single-player MMO-like game such as Ninelives is something special? Or, just the evolution of MMO games toward what seems to be their single-player destiny?


RSS feed for comments on this post.
TrackBack URI: http://psychochild.org/wp-trackback.php?p=1336