I don’t take a lot of screenshots of games. Well, not the type of screenshots meant to be shared on a blog. I’ll take reference sceenshots for game development work, but that’s not the game thing.

One of the MMOs I’m playing the most right now is Final Fantasy XVI. I have managed to take a few screenshots of the game, and as an end-of-the-year special post, I figured I’d post some of them.

Not a screenshot taker

Some people seem to play with their finger resting on the screenshot button. Syl in particular has a flair for good shots.

The main reason why I don’t take screenshots is that I often focus on the gameplay. My specializations are gameplay design and programming. I’m not much of a visual thinker, so images aren’t something I focus on much. This is why I’ll happily write a 2000 word count blog post without any pictures.

On a similar note, I tend to get wrapped up in playing a game, to the point that I don’t think to hit the screenshot button. Unlike some of my friends, I can lose myself in a game. Only after playing do I stop to analyze the gameplay, and that is when I think “Oh, I should have grabbed some screenshots.” But, the moment is lost by that tiem and I’d rather focus on playing the game than recreating the perfect shot.

Finally, I have a slightly out-of-date gaming system currently. I can still play most games fine, but I can’t play them on the super-pretty settings that make good screenshots.

That said, I do have a few screenshots to share. Please look forward to them.

Let me tell you about my FFXIV character

Most of my screenshots are of my character. Although altitis hit me hard in LotRO and DDO, I mostly play a single character in FFXIV: Psychochild Ybolgklin. Follow that link to see the stats FFXIV exposes outside of the game.

If possible, I like picking unusual appearances for my characters. Having a long beard in the offline world, I tend to pick dwarves in fantasy games. FFXIV lacks dwarves, but the Roegadyn seem to fill that particular niche despite their giant size. I picked dark skin because it contrasts with my pale skin in the offline world. For the hair, I went with a reddish color since my beard is red. Since the Hellsguard were supposed to be mystics watching over a supposed path to the underworld, I wanted hair that was more complex and looked like it could be ritualistic. I picked pale blue eyes so that they would stand out against the dark complexion and hair; it can be really striking in some of the cutscenes.

As for unusual, my race choice is the rarest: Hellsguard Roegadyn make up only 3% of all characters. Only way my character type could be rarer is if I played a female; female Roegadyn are exceedingly rare.

But I really like the way my character looks. I have 2 free fantasias sitting on my retainer, but I’ve had little desire to use them. The character is perfect the way I envision him.

I usually work all the classes up to maximum level, but I primarily play either Summoner or Black Mage. Summoner is easy mode for soloing things, and works pretty well in the dungeon. I liked the Black Mage mechanics before the expansion a lot, but the new mechanics for the Heavensward expansion make the Black Mage a bit clunky, so I’ve been mostly playing as a Summoner. I’ll often play a White Mage as a healer, and a Warrior as a tank when the fancy strikes me.

Let’s get to the pictures! Most of these are fairly recent, and a few taken specifically for this post. Enjoy!

You should be able to click on any of the pictures below for a full-size version. 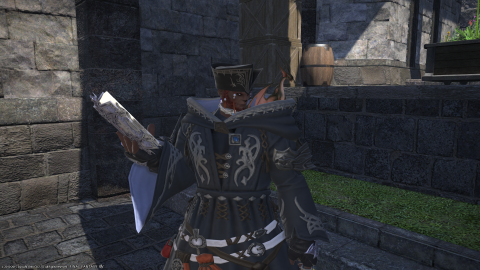 Here I am in a slightly older set of gear as a Summoner. I have the Midgardsormr minion, nestled into the extra large hood of the Orthodox Robe of Casting. 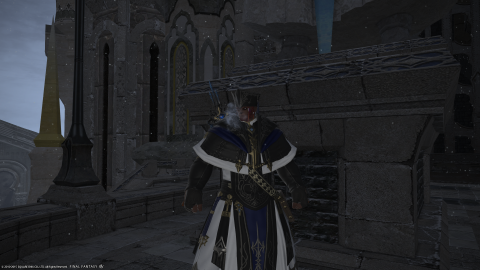 This is the robe to go with that hat in the previous image. It’s the Halonic Exorcist’s set from The Vault dungeon, including the staff for Black Mages. 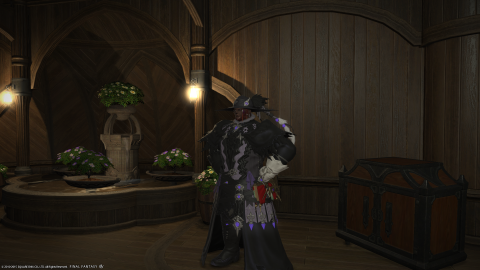 One problem is that a lot of caster gear looks silly or even just hideous on the big Roegadyn frame. A lot of the times the caster gear just doesn’t look very good on my character, such as this Void Ark Caster set (less the gloves). My friend described this outift as “a laudanum fueled nightmare of a Victorian nanny”, while another person described it as “Ving Rhames trying to dress up as a witch.” The hat really makes it look silly, but happily I can hide that in the character options. 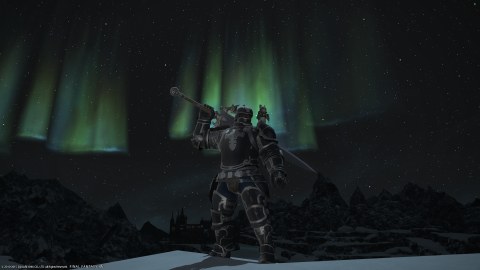 Here I am as a super-emo Dark Knight with my super-fricking-adorable gaelikitten minion (best million gil ever spent). The northern lights in the Coerthas area are absolutely gorgeous, too. A bit of trivia: The armor is actually “Ink Blue” color instead of black. Even in a brighter environment, you’d be hard-pressed to tell that was supposed to be a very dark blue instead of black. 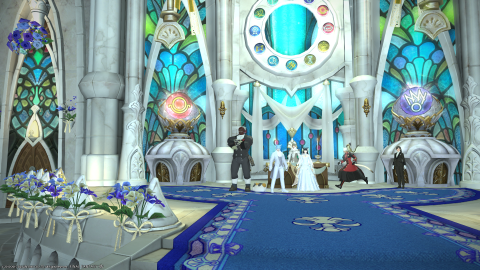 Here I am all cleaned up, attending the wedding of some of my guildmates. I’m using the most gentlemanly suit and pants. The location was really gorgeous, but only available if you fork out some actual money for the ceremony. 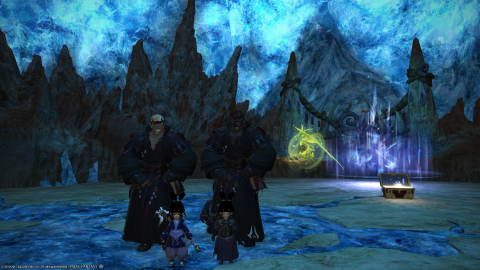 This was a fun dungeon run via the Duty Finder. The other Roegadyn was dressed in the same gear I was, the caster gear you can buy with Tomestones of Law. We even both had the “Gentleman” title active! The two Lalafell, the tank and healer, both had the Spriggan cap. They group was chatty and fun. Unfortunately, since the Duty Finder is cross-realm, we are unlikely to ever see each other again. 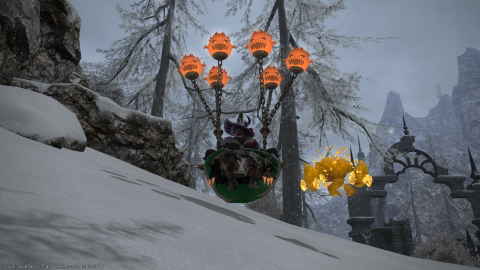 FFXIV answers the question, “What do male casters wear under their robes?” This is the caster set from the pre-expansion dungeon World of Darkness. Some mounts, such as the bomb palanquin gained from maximizing Kobold beast tribe favor, gives you a surprise panty shot when you’re wearing some robes. It did feel a bit drafty out there…. 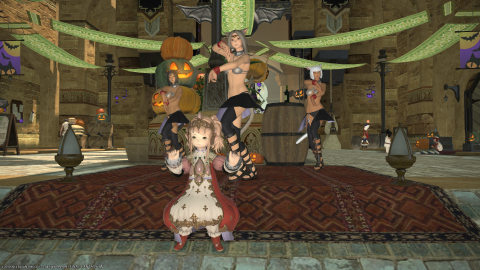 Here we see the sultana Nanamo Ul Namo of Ul’dah getting down with her bad self in front of the dancing girls. This is technically my character under an illusion during last year’s All Saints Wake. One possibility was to look like the sultana, and I took the opportunity to put her in some awkward environments. 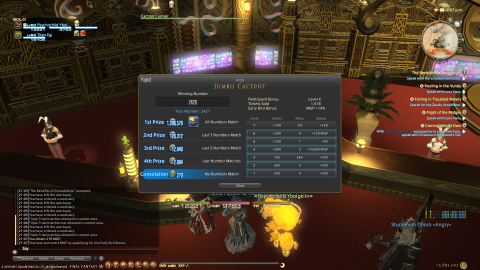 Here’s a screenshot of my ticket for last week’s Jumbo Cactpot. It’s a weekly lotto where you pick a 4 digit number. You can do partial matches from the ones digit to win partial prizes of the special gambling currency. So, matching the ones digit gets you 4th prize, the tens and one digit gets you 3rd prize, etc. You may notice that my number is 1 off, but since matching starts at the ones digit, I win the consolation prize instead of a big prize. *cries*

Now a little something sexy 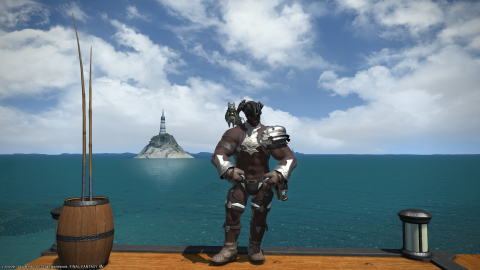 Why hello there…. *wink*

This outfit came about because I had some leftover gear for my Machinist class. Turns out FFXIV has skimpy outfits for both men and women. The chest is the Coliseum Galerus, and the bottoms are an aetherial subligar drop. “Subligar” is Latin for “underwear”, I guess. Anyway, that’s my current Machinist gear set. But those Ishgardian nights do get awfully chilly….

I hope you enjoyed a little glimpse into my life in FFXIV. :) Let me know what you think.


RSS feed for comments on this post.
TrackBack URI: http://psychochild.org/wp-trackback.php?p=1322