It is with great pride that I am announcing my intention to run for President of the United State in 2012! I plan to run as an independent and fight against those fatcats in Washington! Read on for my platform and some campaign materials for you to download!

It was after some careful consideration that I decided I wanted to run for president. I mean, I’ve spent enough time listening to customers whine, I might as well transfer that experience to something worthwhile. Not to mention highly profitable.

My platform is simple: I promise to fix bugs. All of them. Here are some examples:

1. Education I intend to design a better tutorial for our kids rather than continuing with the 12+ year process that seems to drag on and on.

2. Health Care I intend to increase the spawn rate of doctors and medical supplies to drive down costs.

3. Economy I intend to create something shiny and overpriced to drain excess money from the economy to control inflation. I’ll also set up a cash shop to give the government a needed influx of cash.

Excited about Psychochild 2012? I know I am! Here are some campaign materials you can use to get the word out!

A button to wear around town! 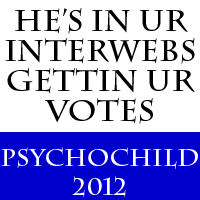 Get the word out today!

« Previous Post: A tale of two free to play games
Next Post: The Fae’s Wyrd is online! »


RSS feed for comments on this post.
TrackBack URI: http://psychochild.org/wp-trackback.php?p=1060